Poverty Reduction in the Digital Age: An Evolving China-Africa Story

It was just another evening livestream session on Taobao, an Alibaba-owned e-commerce and retail-streaming site, but on June 26 this year, there was a special host: the Rwandan Ambassador to China, James Kimonyo. He was there to promote and sell chili sauce made from chili grown and processed in a small village in his home country. Orders of chili from China have helped Rwandan villagers affected by floods and the COVID-19 pandemic. This story may sound strange for some people outside China, but it is very much familiar for people living in China.

In recent years, the flourishing e-commerce industry in China has played an important role in reducing poverty in China’s rural areas. As one of the leading companies at the forefront of technology and e-commerce in China and the world, Alibaba Group has been heavily involved in poverty alleviation in China. In recent years, it has even been taking its initiatives overseas.

The rise of the e-commerce industry in China has brought dramatic change to poverty and income levels in China’s rural areas. E-commerce platforms run by companies like Alibaba, JD.com Inc., and Pinduoduo Inc. provide a virtual market where buyers and sellers can directly communicate with each other, enabling sellers to reach consumers all around China and the world. With assistance from the local government and these companies, farmers in many poor rural areas in China have been able to market and sell their products online and lift themselves out of poverty.

With support and policy guidance from the Chinese government, Alibaba set up its own poverty alleviation campaign leveraging its own unique expertise and culture. Its campaign can be categorized into three stages:

What Impact Has It Made?

In October 2020, Alibaba published a report summarizing its poverty alleviation campaign in China in the past five years. Between 2015 and 2020, the 832 counties identified by the Chinese government as national-level impoverished counties sold over RMB 310 billion (USD 46.29 billion) worth of goods on Alibaba’s platform, with over 1.2 billion packages sent out. More than 320 million internet users have watched streaming on Alibaba’s platforms, which has helped raise the incomes of more than 100,000 farmers-turned-streamers and another 1 million farmers. 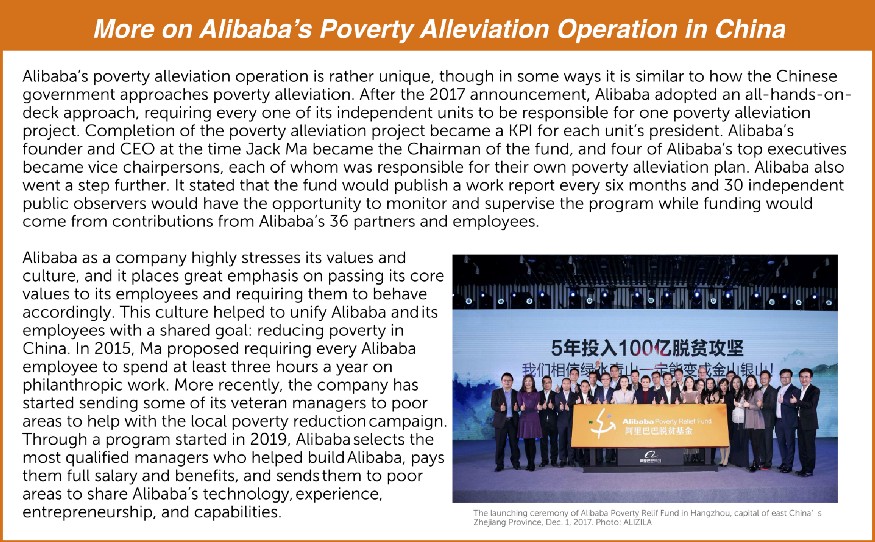 What Are Its Limitations and Drawbacks?

E-commerce in general and Alibaba’s model are not panaceas for poverty. It is important to note that the celebrated e-commerce poverty alleviation programs, including the ones run by Alibaba, has its limitations and problems in China:

Infrastructure and Logistics. In many poor areas in China, infrastructure remains a problem. In areas where internet and electricity remain unstable, it is hard to run a successful e-commerce shop. In addition, insufficient transportation infrastructure in some areas drives up the cost of logistics, preventing the trade of some goods and lowering farmers’ profit margins.

Standardization of Production and Sales. As countless small farmers enter the e-commerce market, each of whom sells their own products, it is hard to enforce unified food safety and quality control standards, with some products failing to obtain any kind of quality certification before entering the market. It is also hard to organize these fragmented suppliers into more effective businesses or industry clusters, which results in ineffective marketing and promotion efforts and failure to fill large orders.

Talent. It is hard for e-commerce businesses in poor areas to train, attract, or retain talent with the necessary e-commerce skills. This is a serious challenge for impoverished counties and villages where young people often choose to leave for cities and more prosperous areas, leaving behind the elderly and children with limited computer and e-commerce skills.

Problems with Alibaba’s Model. A key part of Alibaba’s poverty alleviation model is using the big data it collected on consumers, mostly in China, so they would know what products are needed and where they are needed. This model is unlikely to help poor areas that do not have any products demanded by consumers. In addition, retail-streaming channels hosted by celebrities, a tool used by Alibaba’s Taobao and other e-commerce platforms, has attracted criticisms as some poor areas would pay enormous fees to promote their products on a celebrity-hosted retail-streaming channel and end up losing money due to poor sales performance.

How is Alibaba Taking Its E-Commerce Poverty Alleviation Campaign Overseas?

Alibaba’s effort to export its poverty alleviation programs is still relatively new so it is hard to assess its impact now, but an ongoing project run by Alibaba’s fresh food retail subsidiary Hema Xiansheng (“Hema,” also known as Freshippo) in Rwanda can give us an idea of how Alibaba is taking its approach abroad.

The Hema project in Rwanda is essentially modeled on the e-commerce poverty alleviation programs its parent company Alibaba ran in China. After Hema’s CEO Hou Yi discovered habanero chili on his trip to Rwanda to find quality products to bring to the Chinese market, Hema sent a purchasing manager and team to visit Rwanda in September 2019 to research the possibilities of making habanero products that suit Chinese preferences.

This Hema team studied the habanero chilis and how to cook them, in a bid to turn it into a product that Chinese customers would like. This process was guided by both the team’s expertise and Alibaba’s big data on the Chinese market and consumers. Hema’s team also helped resolve other issues such as how to properly process the chili in Rwanda first since fresh chili cannot be imported to China, what containers they should use because Rwanda has a strict ban on plastics, and dealing with the increasing logistics costs due to the COVID-19 pandemic.

Hema’s team is also developing more products using this chili and plans to help Rwandan farmers upgrade their facilities and skills with help from Alibaba’s digital agriculture department. It is worth noting that this entire project started and was run with help from Dr. Uwizeyimana Herman, a Rwandan who earned his master’s degree and a doctorate in environmental science in China, and Yang Hong, his Chinese wife. Chinese media in June 2020 reported that Hema has ordered more than 60 metric tons of processed habanero chilis from Rwanda, and according to Dr. Herman’s estimation, on average farmers can make five to six times more growing habanero chili for Hema than working in cities. 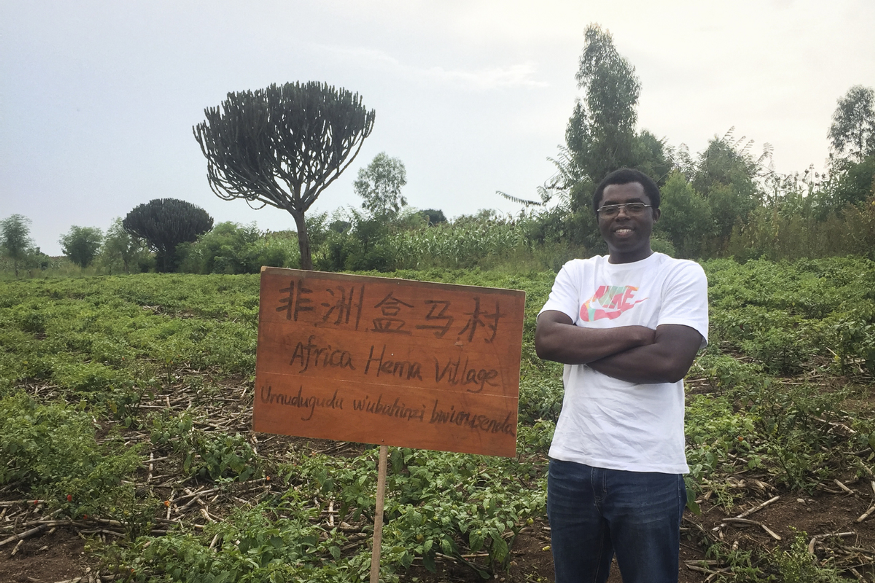 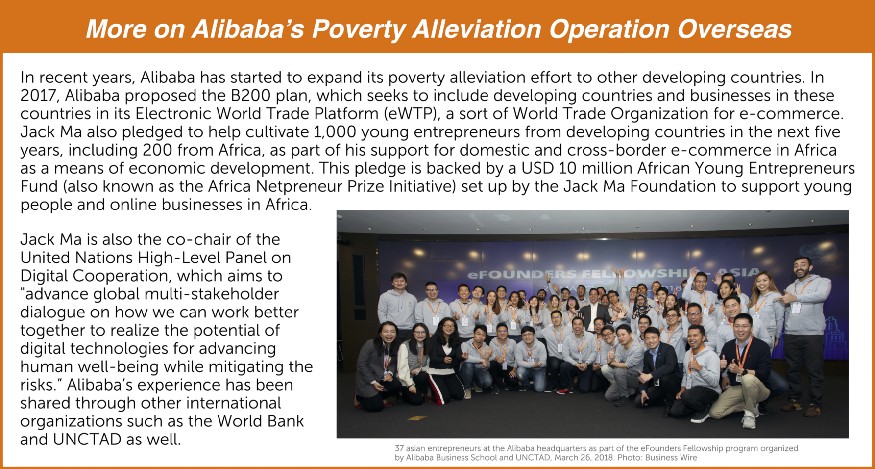 In any case, this project resembles a typical poverty alleviation project in China run by Alibaba: Working with the locals, Alibaba’s team would search for interesting products and develop it leveraging their entrepreneurship and Alibaba’s signature big data analytical tools. Like the representatives Alibaba sends to poor areas in China, Alibaba’s team would help commercialize the product identified via Alibaba’s or other companies’ channels. In this process, they would also work with the local community and government, other Alibaba’s departments, and other companies to resolve problems encountered.

Alibaba is expanding globally under its new Chairman Zhang Yong who stated in 2019 that Alibaba’s long-term goal is to serve 2 billion consumers around the world by the end of 2036, create 100 million jobs, and help 10 million small and micro-sized enterprises (SMEs) make profits.

Alibaba is also attempting to fulfill its pledge to include more developing countries and businesses in these countries in its network Electronic World Trade Platform (eWTP), a sort of World Trade Organization for e-commerce. Alibaba’s eWTP’s first overseas hub was established in Malaysia in 2017. Rwanda is the first African country to join eWTP in 2018, and the Hema project in Rwanda is a direct result of several agreements signed between Alibaba and the Rwandan government to promote cross-border trade, capacity building, and tourism in Rwanda. Ethiopia followed suit in 2019, establishing another eWTP hub in Africa. These hubs, designed to enable cross-border trade, provide logistics services, assist local SMEs to reach China and other markets, and provide talent training in developing countries, show Alibaba’s ambitions as well as potential to help with economic development and poverty alleviation in developing countries.

Nevertheless, like its poverty alleviation programs in China, Alibaba’s efforts overseas have its limitations and could cause problems. In addition to the China-focused issues mentioned above, local and international stakeholders should pay special attention to these issues:

Local Knowledge. Chinese companies operating in foreign markets such as Africa often suffer from a lack of local knowledge. A McKinsey field survey in 2017 pointed out that despite the fact that 89 percent of employees at the Chinese companies it surveyed were African, African interviewees “described language and cultural barriers that lead to misunderstanding and ignorance of local regulations.”

Big Data. Developing countries are adopting more safeguards in the collection, handling, and sharing of data, which would require Alibaba to adjust its collection and use of big data accordingly. For example, Kenya approved its first data protection act in 2019, and fellow big data collectors and users such as Facebook, Google, and Twitter have already been warned by the Kenyan government over any possible misuse of Kenyan’s personal data.

Disruptions to Existing Economic Activities. Alibaba’s platforms and programs could disrupt existing economic activities in developing countries it enters, as it did in China. Media reports have already shown African middlemen working in China are losing their jobs because of the growing popularity of Alibaba’s platforms which allow companies to directly negotiate orders. The COVID-19 pandemic has also accelerated this trend. As Alibaba continues to expand and grows in developing countries, it may cause the creative destruction it helped start in China.

Competition with Local Businesses. Many developing countries have their own e-commerce companies such as Jumia Group in Africa and Lazada Group in Southeast Asia. Competing with a global giant like Alibaba can be hard for relatively small local players. For example, Lazada was acquired by Alibaba in 2016.

There is no doubt that China and Alibaba’s experience, programs, and capabilities have contributed significantly towards poverty alleviation within the country. There is much to be optimistic about indeed: early attempts at exporting this model to other developing countries abroad look positive. Yet, they are not without potential pitfalls, as outlined above. As developing countries, development aid agencies, and international organizations consider working with China and/or leading Chinese companies like Alibaba in this promising area, they must also understand these programs’ limitations and problems.

Zixiang (George) Zhou is an experienced international relations and development professional who has worked in Washington DC, Nairobi, and Beijing. Find George on LinkedIn.