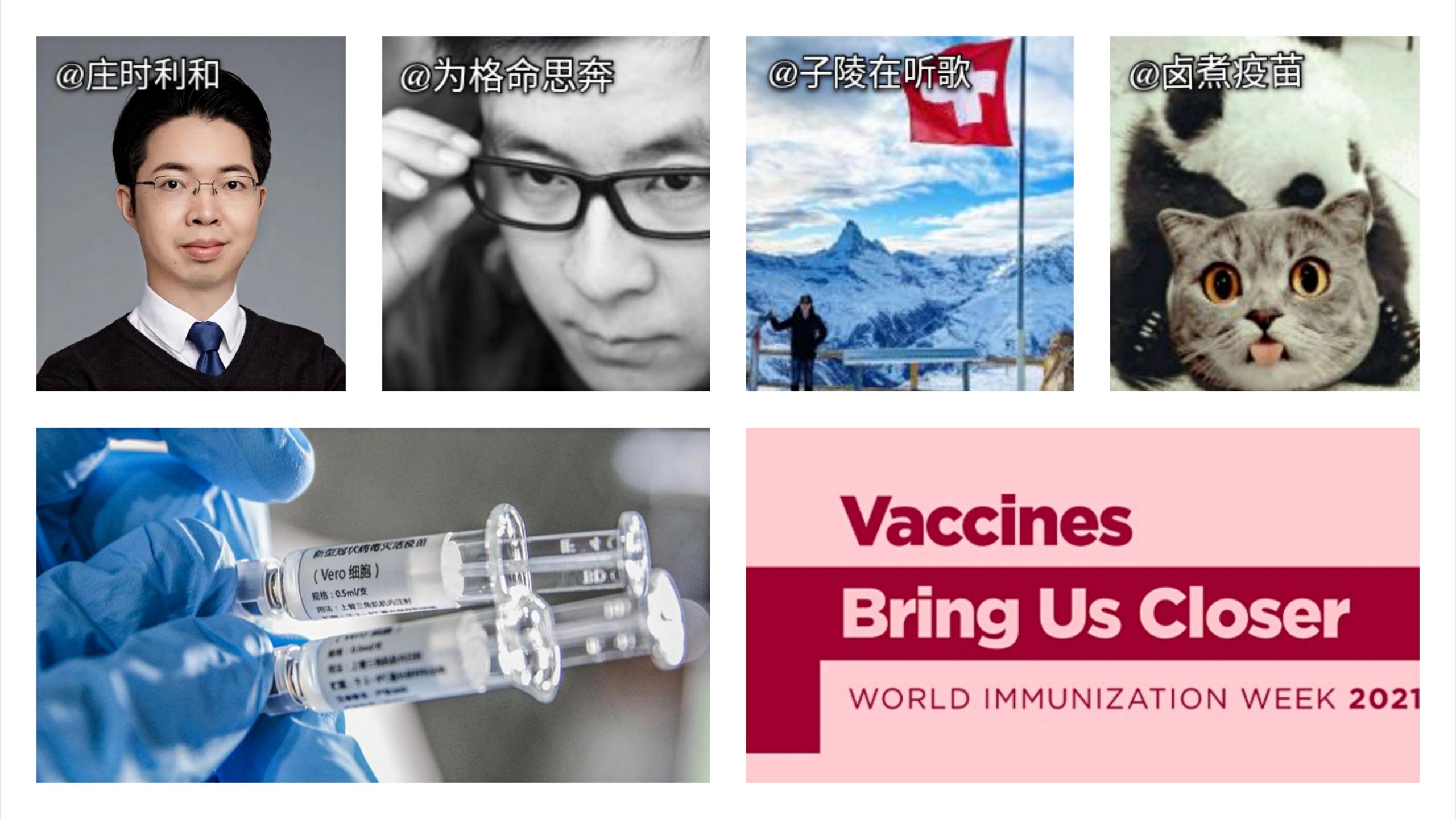 A year ago, in hopes of a quick end to the pandemic, there was much discussion over the development of a COVID-19 vaccine. One year on, although multiple vaccines have already been developed and nationwide vaccination programs launched across the world, the pandemic continues to rage on.

In China, as of April 26, 2021, almost 225 million vaccine doses have been administered across the country – far below the nation’s goal of vaccinating 40% of population (about 559 million people) by end of June. While there was much anticipation for the COVID-19 vaccines a year ago, people today appear hesitant, even when offered them for free. With few new COVID-19 infections reported in China for a long time, and air of complacency seems to have emerged.

To curb vaccine hesitancy in China, local health departments sought creative ways to encourage vaccinations, even using catchy and amusing slogans such as internet buzzwords. Those slogans have proven successful, at least to the extent of them getting the attention of people. Many have been widely circulated on social media and have garnered lots of positive feedback from netizens, including some claiming to have been convinced to get vaccinated.

The most popular slogan on Chinese social media platform Weibo was one that adapted the lyrics of a popular song in China going by the name “Learn to Meow” (“学猫叫”). Popularized by CCTV news anchor Li Zimeng’s broadcast, the slogan reads: “我们一起打疫苗，一起苗苗苗苗苗”, which translates to: “Let’s all get vaccinated (the second half plays on the Chinese word for “vaccine”, yìmiáo, where “meow” mimics “miáo”)”. The original song was widely popularized in China on short video sharing platform, Douyin (the China-facing version of TikTok). 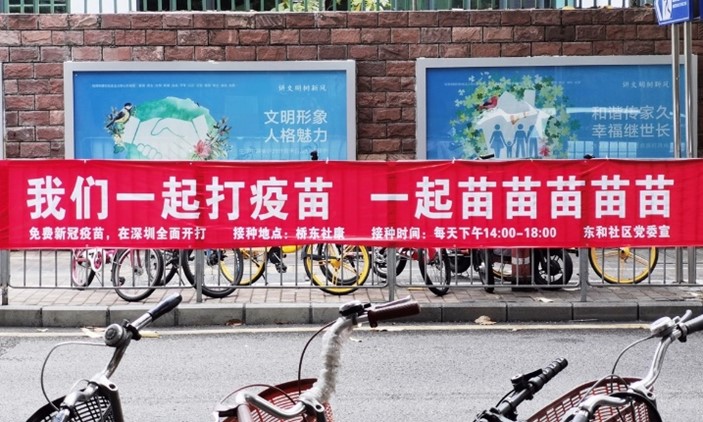 While government agencies were finding creative solutions to tackle vaccine hesitancy, we also saw an increasing number of digital influencers emerge as prominent voices of the vaccine conversation in China, especially on Weibo. Not only have these influencers provide scientific vaccine and immunization information to the Chinese public, they have also helped to present this information in a simple and relatable manner to their audiences.

With over thousands of engagements and high-quality comments on their posts, these influencers have contributed to the fight against vaccine hesitancy in China. Here are four Weibo influencers you need to know that are leading the vaccine conversation on Chinese social media.

An HIV immunologist at the National Institute of Health, part of the United States Department of Health. Find Bill Wang on Twitter.

Wang is currently the most popular health-related influencer on Weibo. Since 2007, Wang has been posting his thoughts on medical research and life on his Sina blog, one of the most popular social media platforms before Weibo and WeChat. Wang earned his medical degree in China and a PhD in immunology in the United States. He currently works at the National Institute of Health (NIH), as a medical researcher on HIV immunization and AIDS treatment. In 2014, he began publishing analyses of the latest scientific papers on HIV research, and expanded his content to COVID-19 during the pandemic, which gained significant traction on Weibo.

Bridging the gap between science and the public. Since the start of the pandemic, Wang has been posting daily updates on the latest developments in COVID-19 vaccines, diagnosis, and treatment. He effectively breaks down scientific articles into bite-sized information for his audience.

An international perspective on vaccine knowledge. With his cross-cultural medical background spanning both China and the United States, the edge Wang has over traditional science media in China is the international perspective he brings. Besides analyzing academic papers, he also translates and summarizes articles from leading international publications, including the New York Times, The New Yorker, Wall Street Journal, and Nature, to recommend overseas reading sources to his Weibo followers. This brings the latest vaccination news outside China to netizens who cannot access them easily. 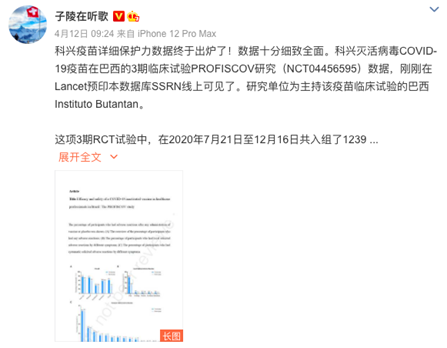 Wang is another popular health-related influencer who attracted a lot of attention during the pandemic. Since early 2020, he has been posting his observations and thoughts on COVID-19 responses and vaccine developments on Weibo. Gradually, netizens found out that he was Nianshuang Wang, a scientist behind the development of the mRNA vaccine. As his story began circulating widely on Weibo, his Weibo follower count increased drastically from 200 to over 40,000 in just one year.

Bringing information on mRNA vaccines to the public. Previously a research fellow at the University of Texas, Wang designed the stabilized SARS-CoV-2 Spike protein, which is at the heart of the mRNA vaccines developed by Moderna and Pfizer-BioNTech. Wang’s major contribution to the development of the mRNA vaccine made him a trustworthy source of vaccine information for Weibo netizens, who were persuaded to receive vaccinations after reading Wang’s posts.

Sharing professional knowledge to encourage vaccinations. Besides sharing scientific knowledge on his Weibo, Wang also posts about his daily life, and his thoughts on vaccines and COVID-19 response. Wang’s most recent post is of him receiving the Pfizer-BioNTech vaccine, and this garnered lots of positive comments from people who have already been vaccinated. 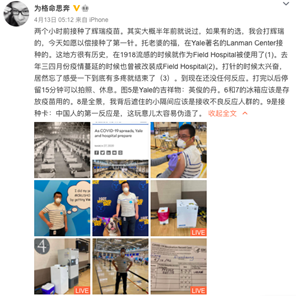 Luzhu Vaccine (real name undisclosed) started his Weibo in 2015, and unlike the previous two influencers with scientific backgrounds, is currently working as a marketing specialist at a vaccine company. Luzhu shares information on the latest approved vaccines with his up-to-date vaccine knowledge.

An active Weibo follower group, where KOLs and followers can chat freely. In addition to sharing vaccine knowledge, Luzhu has also created Weibo follower groups to facilitate the discussion and exchange of vaccination information among his followers. He named the group “Finding the Vaccine” (找疫苗), which has become a space for followers to share their vaccination experiences and concerns. Questions posed by followers in these groups will be answered promptly by Luzhu himself or other group members, allowing his followers to receive quick vaccination information and have their doubts addressed from these groups with ease. 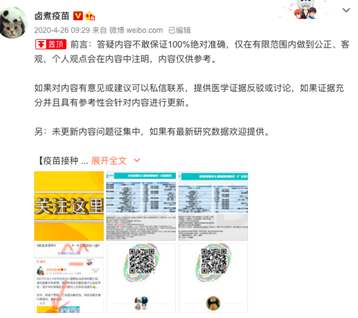 Unlike the previous influencers who have had accounts before 2020, Zhuang only joined Weibo at the start of the COVID-19 pandemic. He has received medical training from universities in China and Japan, and brings the physician’s perspective to the vaccine conversation on Weibo. Since November 2020, he began writing long analyses of the COVID-19 vaccines’ efficacy rates, clinical trial results, and unexpected issues related to vaccine development. Most of his posts target doubts and questions about vaccines to curb vaccine hesitancy among his audience. Zhuang gained over 60,000 followers just over one year.

Knowing concerns over COVID-19 vaccines in China. As a physician, Zhuang has a firsthand understanding of vaccine hesitancy in China, and discusses extensively updates on Chinese vaccines, especially Sinovac and Sinopharm’s vaccines, including prompt analyses of international clinical trial results from these companies. He also answers questions from Chinese netizens about the vaccines and provides advice. In Summary: The Vaccine Conversation in China Today

The Weibo influencers who are leading the vaccine conversation on Chinese social media today bring a multi-faceted perspective with their varied overseas experiences and professional backgrounds. They have also quickly earned the reputation as trustworthy and go-to resources among the Chinese public, given that their insights and information are largely based on their scientific knowledge.

Diversity of influencers and viewpoints. Unlike full-time digital influencers, the KOLs mentioned have their professional careers apart from posting on their Weibo accounts. These influencers come from different professional fields, including researchers, physicians, and business executives who work in the vaccine industry. The variety of professions provide multi-faceted discussions with inputs from different perspectives.

Growing recognition both domestically and abroad. Having well-established careers also imply that these KOLs are highly likely recognized on the international stage as well. Some organizations have already worked with several KOLS on vaccine campaigns. For example, Nianshuang Wang was interviewed by leading international media outlets for his groundbreaking work on the mRNA vaccine. Domestically, Shilihe Zhuang was also approached by DXY, one of leading science media outlets in China, to write a vaccine development analysis piece.

More interaction between KOLs and followers. Questions posed by followers about vaccines on the KOLs’ Weibo posts are often answered quickly by those KOLs, providing the real-time feedback that consumers have grown accustomed to. Insightful discussions among followers are also facilitated via the Weibo platform, which have in turn helped raise vaccine awareness across the country.

With a growing population of social media users, Weibo is now the alternative source of verified information on vaccines for many in China. These leading Weibo influencers will pave the way for the vaccine and scientific conversations in China for years to come, even after the pandemic has settled.

A global citizen and public health communicator, Xulei is a senior associate at Bridge Consulting. Find Xulei on LinkedIn.