Our Planet, Our Health: Reflecting on the link between Earth and our wellbeing

Our planet is in crisis – this has been the sentiment shared across the board, especially among those who study or follow the news about the environment. The latest studies, findings, and calls to action often feel quite apocalyptic, indicating an end to our planet as we know it if we do not act fast to mitigate the impacts of climate change. Not to add to the doom and gloom, but there is a part of the environmental crisis that is much less appreciated but equally as consequential to our way of life as a global community: its impact on human health. Over the years, this intimate connection has been increasingly revealed in China, but the economic and policy responses to these emergencies have often come off as conflicting, which is a strong cause for concern.

The current COVID-19 pandemic has profoundly impacted our world in many ways. From challenging our healthcare infrastructure, disrupting global supply chains, to bringing stakeholders together in one of the most outstanding showings of altruism such as through the COVAX initiative. At the same time, this pandemic produced one of the most significant environmental phenomena in recent history.

You might recall that in the early days of the pandemic, reduced international and domestic travel created a drastic drop in carbon emissions levels, and in many of the world’s most polluted cities, the skies were clear again. It seemed like a dream for many, a sight that was once deemed impossible given our modern consumption habits. In many ways, when the world was brought to a standstill because of COVID-19, we were offered a peek into what the world could be if we took reducing carbon emissions seriously and with haste. 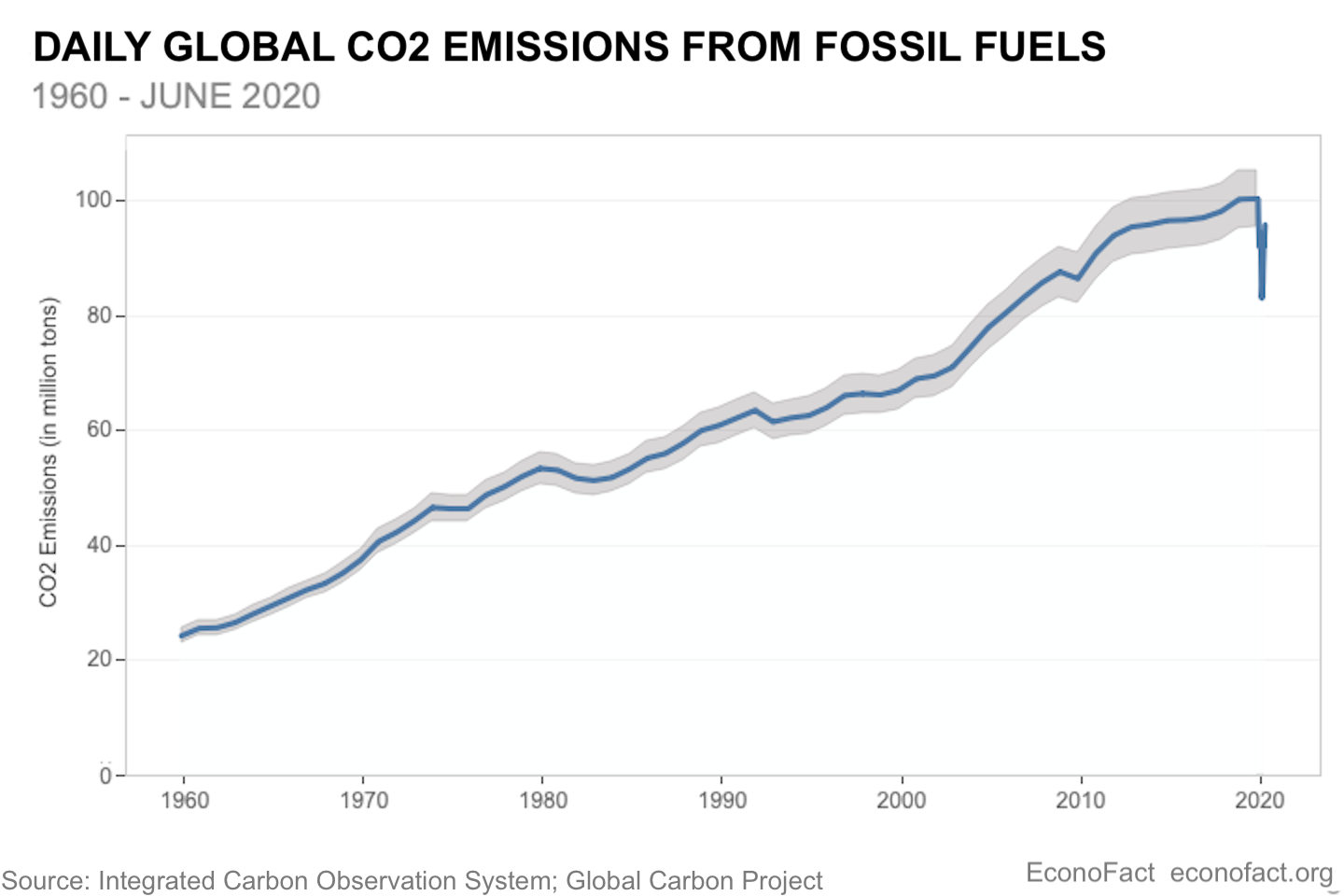 This dramatic drop in emissions levels was similarly experienced in China, where early pandemic policies completely changed the lives of Chinese citizens at the time. Lockdowns and limits to travel meant less petrol was being burnt, and restrictions on non-essential economic activities, especially in factories, further reduced emissions. 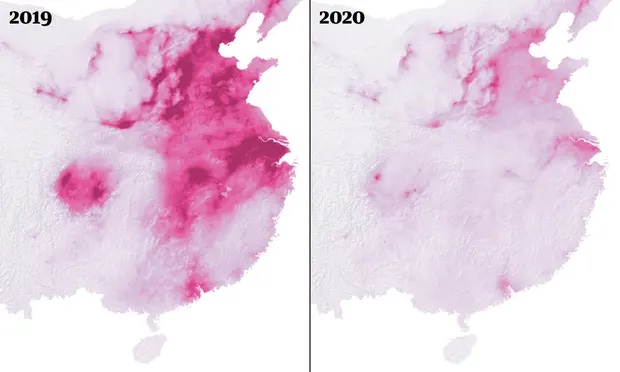 Air pollution map of China before and during the pandemic. Source: The Guardian

Studies from that period found an overall decrease in air pollutants across the country, but the most marked decrease was in major economic centers. Air quality reached an all-time high, and many cities finally met regulation standards. This was not only a win for the environment in urban China but also a win for the citizens; the air was finally clearer and safer to breathe. In a way, a global pandemic improved the environment, which elevated the conditions for public health by reducing pollution levels.

The intimate connection between the environment and human health is a reality that can be observed beyond the current pandemic, especially when looking at China. The country has long been known to have an air pollution problem, especially in its major cities. As it continued to modernize and urbanize, that problem has only gotten worse over time. Pollutant levels were so high in some cities that around 2013, the situation in China was dubbed an “airpocalypse”, which refers to the potentially devastating impacts of the seemingly permanent blanket of smog over the country.

Experts have found that air pollution is a public health crisis as it has been linked to increased incidences of diabetes, lung cancer, heart disease, and more. A 2020 study estimated that in 2017, 1.24 million deaths in China could be attributed to prolonged exposure to air pollutants like PM2.5. Another consequence of China’s rapid growth has been water pollution. As coastal cities industrialized, they began a practice of dumping human and industrial waste into water sources.

Meanwhile, coal mines placed immense pressure on resources in water-scarce areas while also contributing to pollution, and large agricultural operations resulted in toxic runoff of chemical fertilizers and herbicides. All this together has threatened China’s clean water supplies, and in places where people consume the dirty water, studies found that citizens were at a heightened risk of diseases like liver and stomach cancer. 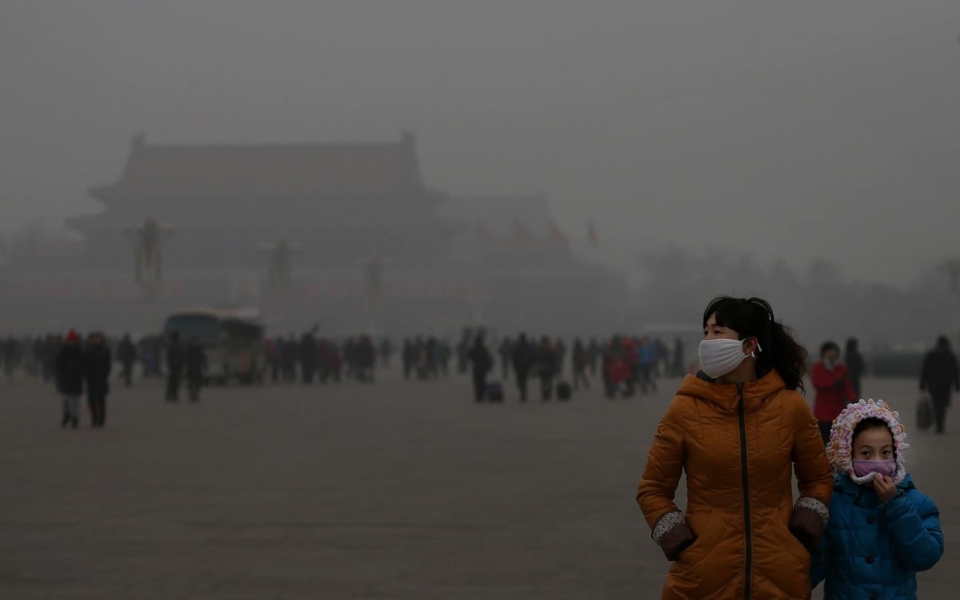 Looking at these trends before and during the pandemic, China illustrated an undeniable link between the environment and human health, and the urgency necessary to address both together and at once. Potentially due to this reality, China has felt increased pressure to enact policies to address both crises concurrently, and officials have consistently communicated that commitment. However, if we look at China now, one cannot help but feel just a little bit confused. 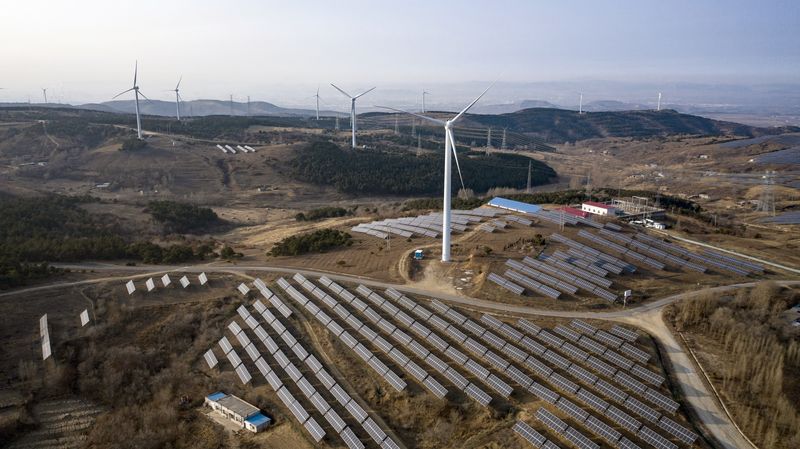 On the one hand, the official stance has emphasized many environmental goals, in particular, the goal of reaching an emissions peak by 2030 and being carbon-zero by 2060. The government’s development plans heavily embrace the greening of all sectors, use of green technology, and strengthening of regulatory measures. We see a pivot from industry players towards renewable energy. Some examples are: one of China’s largest coal companies announced it would channel half of its capital to clean energy by the end of the decade, and a mega hydropower plant on the Yalong River recently became operational. China also announced it would install a record number of wind and solar power units in 2022, and a project in inner Mongolia has been approved to produce green hydrogen.

However, it does not go unnoticed that, at the same time, China has greenlit several mega coal projects in Zhejiang and Inner Mongolia (where two mines have been approved). Recent struggles with domestic energy supplies have driven this new zeal for coal, but this also means that China is projected to reach emissions levels higher than even pre-pandemic levels as the country recovers economically.

No one can say what exact consequences will result from every nuance in China’s current environmental policy. However, it is well established that whatever those policies might be, they will impact the long-term health and well-being of Chinese citizens across the country. Hence, for an observer like myself, the current initiatives and policies communicate conflicting messages on what China’s concrete plans are moving forward for the environment.

This lack of clarity is concerning because not only are we running out of time, but the planet is also running out of time. The longer we take to act decisively upon climate change, the worse it will get and the more serious the threat to our human health. We are not disconnected from this Earth, and it is this awareness that has driven the World Health Organization to theme this year’s World Health Day, “Our planet, our health”. If the environment collapses, we will not be spared from the consequences, so every major stakeholder must act now. We are already late, but in this situation, it is better to be late than never.

Christine is a Junior Consultant, based in Los Angeles, California, with a passion for sustainable development and environmentalism. She is an experienced researcher with experience in policy analysis, environmental studies, global health, and communications. Find Christine on LinkedIn.

Fill, finish and beyond: How Chinese vaccine developers are exporting their ambitions