Reflections from the 2020 China Census: A Silver Tsunami, A Reluctant People 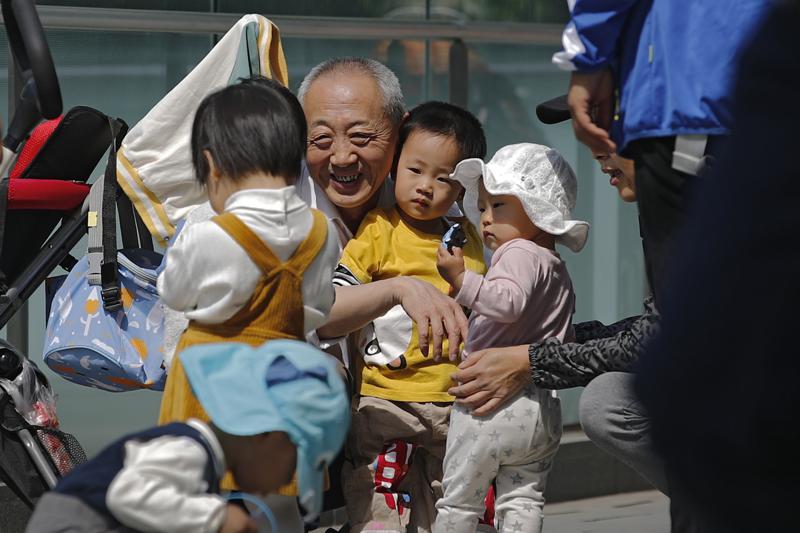 At the end of 2020, the Chinese government conducted a once-in-a-decade demographic survey known as the National Population Census of the People’s Republic of China, or the China Census for short. This is the seventh census to be conducted since its implementation in the 1950s. Results from the census released in May this year gave us some interesting insights into China’s gender “re-balance” and increasing literacy rates. However, arguably, the most talked-about finding that came out of the census is China’s slowing population growth, contributing to an increasingly apparent phenomenon of an aging China. This World Population Day, we take a deeper look into this trend, from the numbers to official and public reactions, and finally the potential consequences of an aging China. What will happen as one of the largest economies’ workers start growing older?

Key findings of the 2020 Population Census

With data now publicly available, China can now confirm concerns over its declining birth rate and aging population. It is of no wonder why China’s Seventh National Population Census sparked a slew of discussions both in the media and on social media. Here are some key findings that were most talked about:

Slowest population growth in the last decade. Ever since the one-child policy was introduced in the late 1970s, population growth has gradually slowed in China, but not at such rates seen in the past decade; China’s population increased 5.38% to 1.41 billion, making this the smallest growth since modern census-taking began in 1953. China narrowly missed a target set in 2016 to boost its population to 1.42 billion by 2020.

Urbanization rate continues to grow. As China continues to relocate people from rural to urban areas, alongside its industrialization and digitization plans, the urban population has surged from 49.7% in 2010 to 63.9% in 2020. The continuous increase in urbanization has inadvertently increased the costs of living in China, contributing to the financial difficulty associated with raising a family. 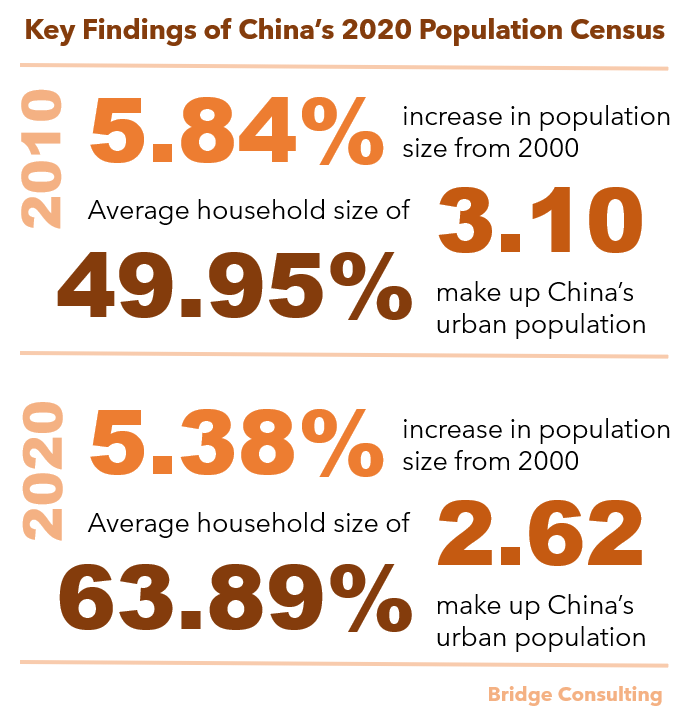 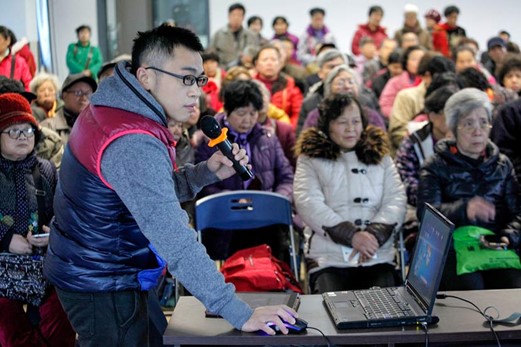 After the official release of the Census, official press conferences were held in cities all over China to address questions from media outlets. With a focus on concerns over China’s aging population, government officials had the following responses:

An aging population also presents opportunities for China. Apart from the financial challenges that confront families and public services, officials stated that China’s aging population will also open doors for the development of the “silver economy”. While the elder care sector remains a huge part of this economy, with more seniors getting accustomed to digital technology, they have also become a significantly large customer segment in the e-commerce world.

As the workforce shrinks in quantity, its quality must increase. Officials have emphasized the importance of high-quality labor resources over quantity, stating that more working adults are obtaining higher levels of education and leading healthier lives. Coupled with increasing technological innovation in China, the increasing quality of China’s workforce is expected to increase productivity levels nationwide, thereby accounting for the shrinking workforce.

In response to China’s aging population concerns, the country introduced a three-child policy on June 1, 2021 – a major policy shift that was covered by media outlets around the world. Officials stated that while the two-child policy implemented in 2016 saw an increase in birth rates in 2017, its effect is now dwindling, due to delayed marriages, less willingness to have children, and financial burdens of the COVID-19 pandemic. In line with the three-child policy, the Chinese government will also ensure the further implementation of policies to support working mothers.

Public Reactions to an Aging China

Looking over on social media, it would seem that most Chinese netizens are unfazed by the recent reports of China’s slowing birth rates. Some have even expressed that a slowing birthrate, but a growing economy is a sustainable model for China’s future growth. The three-child policy on the other hand has led to heated debate online not only on the effectiveness of such a policy but also its impact on women in China.

Skepticism of three-child policy’s effectiveness in raising birth rates. For the most part, Chinese netizens have expressed skepticism towards how effective this policy could be. Citing the high costs of housing, healthcare, and education, most express that raising a family in today’s China is incredibly difficult. Until those issues are resolved, many argue that a three-child policy is unlikely to yield the increase in birthrate China hopes to achieve. Additionally, beyond the burden of raising a child, netizens have also pointed out that they also have to care for their elderly parents. This makes raising a larger family that much more difficult.

Social consequences of the three-child policy on women in China. Additionally, many people online have pointed out that the three-child policy will hurt Chinese women especially. A trending hashtag on Weibo #the potential problems working women will face with three children has organized a convergence of opinions on how this policy will harm women’s careers prospects, progression, and overall the unfair domestic pressures that will be borne by women as a result. Without accompanying social policies to encourage men to share the burden of child-rearing, or protect women’s careers, many Chinese women online echo the reluctance to have larger families.

With regards to the latest statistics, experts have come up with predictions on when the Chinese population is set to peak. Officially, the government believes that China will start experiencing a shrinking population after 2027. Some scholars refute that claim such as south Guangdong-based independent demographer, He Yafu, who believes that China’s population will start falling as early as 2022. 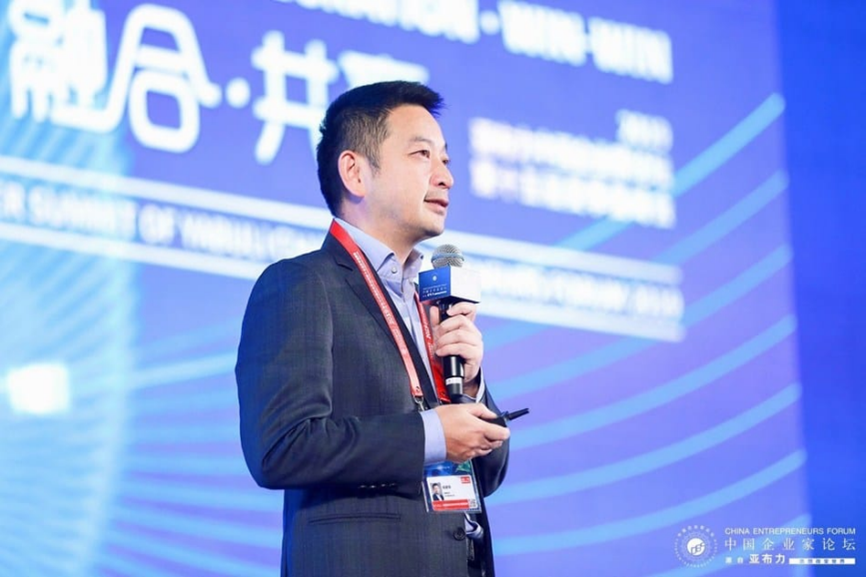 Three-child policy likely to be ineffective. On the new three-child policy, studies conducted predict that the policy will have little impact on China’s aging problem, due to sentiments echoed online on the difficulty of raising a child in today’s China. A team of demographers in the Renmin University of China found that the policy will likely only lead to an annual birthrate increase of 200,000 to 300,000 in the next five years, which is only a slight increase from the current birthrate – an increase that is insufficient to make up for the portion of the population that is rapidly getting older.

Supportive policies needed. For a generation of youth that find little incentive to have a large family – or even start one in some cases – experts recommend the government to look into policies that relieve the financial stress of child-rearing to encourage young people to have more children. One recommendation that has garnered significant discussion online came from businessman and economist, James Liang, who suggested that for China to meet its target of 10 million more births, the government should consider providing a monetary reward of 1 million Chinese Yuan (around USD 155,000) for every child.

Impacts of an Aging China

An aging society presents a distinct challenge for China that has traditionally relied on labor-intensive manufacturing industries supported by a cheap and young labor force. As the population gets older, the available labor pool will simultaneously shrink. These will give rise to the following challenges both for China and the world:

Domestic economic challenges. While the Chinese economy has been pivoting away from manufacturing in recent years – in part due to rising labor costs – the country is still largely dependent on manufacturing as a key driver of growth. Automation is a solution, but some scholars note that an older population might be slower to innovate and adopt new technologies which will hurt labor productivity overall. In that same vein, some scholars have argued that an aging population is less inventive which will eventually hurt long-term growth.

Increased burden of eldercare. As the population gets older, so does the demand for eldercare. Traditionally, according to Chinese customs of filial piety, care for the elderly was a familial affair, one that children were expected to fulfill. However, as the cost of living rises, many urban families especially are finding it increasingly difficult to care for their elderly parents. This has led to a growing demand for eldercare services which, in recent years, has grown through private endeavors, without government oversight. China has a lot of catching up it needs to do in terms of building reliable services and infrastructure in the silver economy to cater to its older population. The good news is that the Chinese government is sensitive to these growing needs and has publicly announced a commitment to improving eldercare in the country. 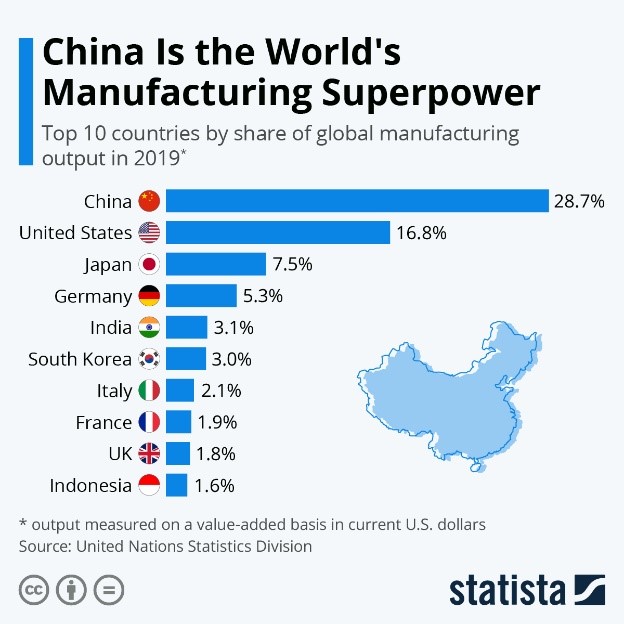 Country ranking by share of global manufacturing output in 2019

Spillover effects on the international economy. The impact of the decline in the manufacturing industry extends beyond China itself. As the “world’s factory”, China is the largest manufacturer in the world. According to the United Nations Statistics Division in 2019, China was responsible for 28.7% of the global manufacturing output and is valued at around $4 trillion. The world is very much reliant on China for many of its goods, and the global supply chain is intricately tied to China’s economy. Therefore, economists note that China’s aging population will invertedly impact the international economy, particularly on the issues of supply chains. That being said, some scholars also cite this as an opportunity for emerging economies like India to grow their manufacturing industries and take the place of China as the next “world’s factory”.

China’s population is undoubtedly aging, yet despite the loosening of population control measures, it does not seem like young Chinese people are too keen to have bigger families. This trend was to be expected as China’s economy grows and becomes a middle-income country. It now faces similar problems faced by other developed economies in the West, and their neighbors Japan and South Korea.

What can be done? At least, based on expert and online reactions, the Chinese government should be looking into strengthening social policies and safety nets to not only care for the aging population but also make raising a family more affordable. While this is not a sure-fire way to increase birth rates (as many developed economies have already tried heavily incentivizing giving birth to children), it is still a step forward in making it at least a more viable option than it currently is.