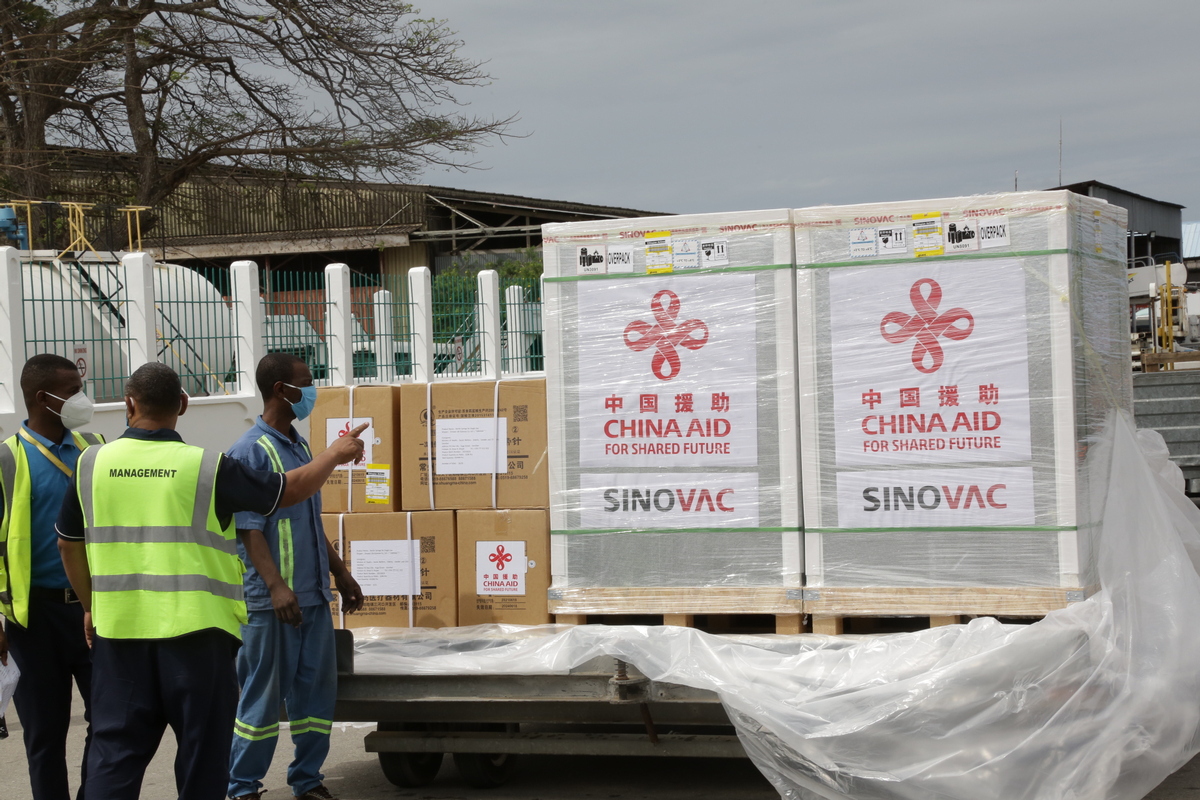 In line with his previous commitments at the 73rd World Health Assembly and the G20 Global Health Summit, China’s President Xi Jinping gave a new written announcement that China would strive to provide two billion doses of vaccines to the world this year and donate $100 million to the international vaccine distribution system known as COVAX to support vaccine access in developing countries.

This landmark statement which has been applauded globally and locally was made at the First Meeting of the International Forum on COVID-19 Vaccine Cooperation (hereafter referred to as the Meeting) on 5th August 2021. The Meeting was hosted via video link by Chinese State Councilor and Foreign Minister Wang Yi and was attended by various foreign state officials along with representatives from vaccine manufacturers and international organizations such as the United Nations, the World Health Organization (WHO), Gavi, the Vaccine Alliance (GAVI), and the Coalition for Epidemic Preparedness Innovations (CEPI).

Since the pandemic outbreak, China has been seeking to play a significant role in the global fight against COVID-19. It has also sought to make Chinese vaccines a global public good. However, concerns over the declining efficacy of existing vaccines against mutations and a lack of clinical data against the Delta variant has placed Chinese vaccines under much scrutiny. As such its vaccine developers continue to try to convince the general public and foreign experts that it is effective in reducing the risk of symptomatic and severe cases caused by emerging variants. 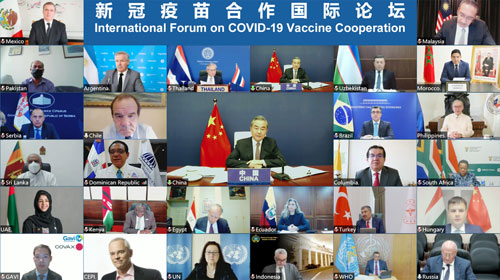 Why is this new pledge significant?

Stable supply. One distinct advantage China has over other vaccine manufacturing countries is that the government itself has a direct hand in producing vaccines. One of China’s major WHO-listed vaccines, Sinopharm, is produced by the state-owned enterprise, China National Pharmaceutical Group.  Sinopharm happens to deliver most of China’s overseas vaccine donations, a probable consequence of its strong relationship with the central government. This means that while countries in the West like those in Europe the U.S, have to rely on private vaccine manufacturers to control production capacity, China is in a unique position to ramp up production as needed to meet its commitments and global demand. In July 2021, China announced that the country had reached an annual COVID-19 vaccine manufacturing capacity of 5 billion doses, much higher than any other vaccine manufacturing country. As such, China has the capability to honor its commitments, a significant contribution to the world once fulfilled.

Additionally, China’s better management of domestic COVID-19 cases has allowed for a more reliable supply of vaccines abroad instead of having to save extra vaccines for domestic usage. This has unfortunately not been the case for neighboring country India that had to halt its AstraZeneca vaccine supplies to other countries as it had to ramp up domestic production for its own inoculation program. Given China’s reliable source for vaccine supplies, this vaccine export ban by India has actually led to shortages in other countries, paving the way for more demand for Chinese vaccines to fill the void.

Shift in aid pledges. It’s very rare that the Chinese government discloses donation amounts to its citizens particularly through local news. This public commitment is thus unprecedented in Chinese aid announcements which have typically veered on the side of vague wordings and omission of actual figures. The presumed reason for this has been to reduce potential controversy or backlash from the public who might view this sort of spending as ‘wasteful’, especially in light of ongoing problems related to equity and access within China itself. However, based on observations of numerous local social media platforms, Chinese netizens have generally reacted positively to this announcement.

One of President Xi’s main talking points has been making vaccines a ‘global public good’, essentially emphasizing the importance of making vaccine access equitable. As such much of China’s vaccine sales and donations have been to low- and lower-middle income countries that have had a harder time securing Western vaccines or any vaccines whatsoever. Despite this, concerns have been growing about whether Chinese vaccines can provide enough protection against the virus, particularly against the Delta variant which is becoming the globally dominant variant: 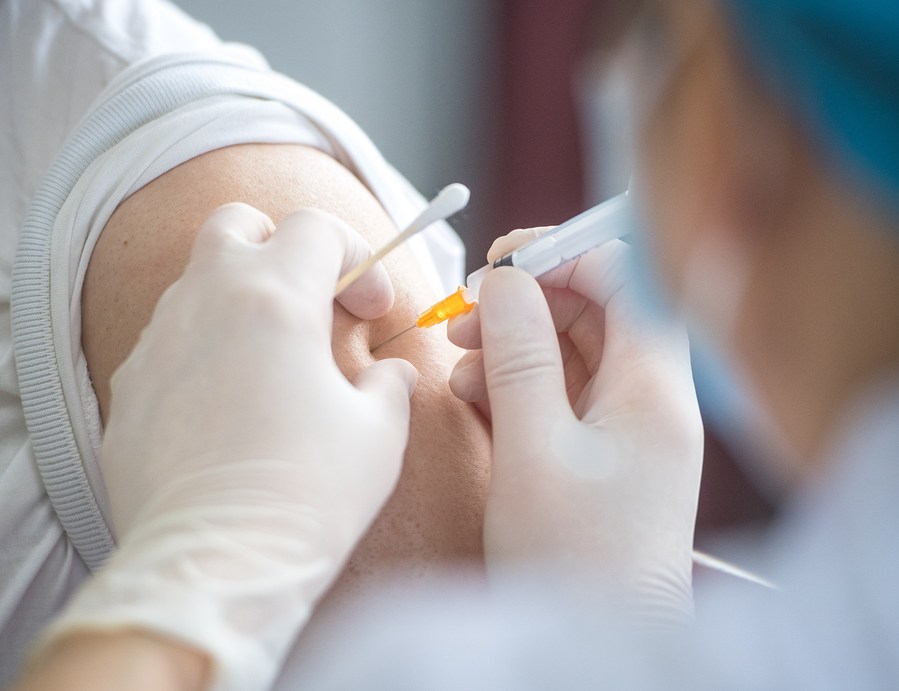 Efficacy concerns. China’s major vaccines have consistently come under scrutiny for their efficacy rates as they are significantly lower than their western mRNA counterparts. Even after the WHO listed Sinovac and Sinopharm under their Emergency Use List, several countries still demonstrated reservations and a refusal to acknowledge these vaccines. This prompted the WHO to release a statement with the COVAX facility urging all countries to recognize approved vaccines for travel. In recent months, the rise of the more contagious Delta variant, both in China and around the world has prompted renewed concerns over the effectiveness of Chinese vaccines.

Growing doubts in Southeast Asia. Several countries in the region were among the first to receive deliveries of Chinese vaccine doses, conduct vaccine trials, and even start constructing domestic manufacturing plants. For example, according to our China COVID-19 Vaccine Tracker, Indonesia alone has received 157.7 million doses of Sinovac and Sinopharm. At the same time, the region has been one of the worst hit by the Delta variant, with many medical professionals who were inoculated with Chinese vaccines eventually succumbing to the disease. As such, Southeast Asian countries have begun turning to Western vaccines or administering booster shots in a bid to enhance their citizens’ immunity against COVID-19.

Moving forward, what can China do?

The commitments China made at the Meeting were undoubtedly significant and important. China’s initiative in gathering different stakeholders together for this forum and to improve solidarity between developing countries in the fight against the virus, is a positive sign of global leadership. However, to achieve greater impact on the world stage, China needs to work with other key stakeholders and international actors, and promote evidence-based vaccine advocacy and communications to better promote a more unified approach in combatting this pandemic.

Invite more people to the table. According to our vaccine tracker data, just 20 of the participating countries alone have received over 80% of all delivered vaccines from China. 12 of them have signed manufacturing agreements to produce Chinese vaccines overseas. As such, most representatives lauded China for being proactive in making vaccines available and providing timely assistance. However, with China’s desire to become a global leader in providing vaccines for all developing countries, it would prove more credible if they extend their scope to invite more than just a few of their largest buyers and closest partners to the table.

Leverage international partnerships. Another way China can further enhance its standing as a global health leader against COVID-19 is to leverage existing partnerships with significant international organizations. Case in point, China has enjoyed a long-standing relationship with GAVI, one of the leaders in the COVAX facility, and has already contributed US$25 million to the organization. CEPI, a large vaccine funding organization, has shown a growing interest in China’s healthcare technologies, most recently signing a collaboration with Walvax to produce a prototype COVID-19 vaccine.

Along with CEPI, the International Vaccine Institute (IVI) has also partnered with Sinopharm to conduct a new programme of clinical research which aims to expand access to its vaccines in Africa. This study is also touted to evaluate the efficacy of Sinopharms vaccines against new variants of concern such as the Beta and Delta variants which now account for the majority of global infections. Further cooperation with such bodies can help enhance China’s credibility in international global health governance and receive the necessary approvals from foreign experts and countries as their vaccines would be supported with the correct, detailed, and transparent scientific data.

Acknowledge the science. In the face of growing concerns about its vaccine data, China should be more open to legitimate criticisms from foreign experts and respond with empathy and science. Working with international partners to trial and test Chinese vaccines, and communicating their results in a detailed way that is accurate and accessible, will further strengthen China’s position as a leader in COVID-19 vaccine provision. No vaccines are perfect but acknowledging that and working towards enhancing it will help quell much of the international skepticism China faces.

Overall, the Meeting has revealed China’s ambitions to be a global health leader in the age of this pandemic. At the same time, reflecting upon the current status quo, it is not a stretch to say that China and its vaccine industry still have many steps to take to become a trustful international partner in the face of emerging variants. Regardless of which, this recent announcement has directed many eyes on China, and we can only wait to see what the country will do next and how other key nations involved in global vaccine distribution will react.

Alex Henderson is a Senior Associate at Bridge. He has 8 years of experience in foreign affairs and international cooperation. He is passionate about enhancing positive relations and collaboration between stakeholders that seek to bring positive change into the world. Find Alex on LinkedIn.

Zoe Leung is a Junior Associate at Bridge. With a background in global health and international development, she understands that health is much more than just a medical matter. She is passionate about finding ways to improve health for both the individual and society. Find Zoe on Linkedin.